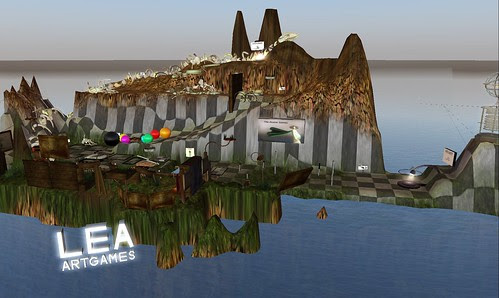 The stage was set and the sim was full. Crap Mariner (http://firstlife.isfullofcrap.com/) and Honour McMillan (http://honour-mcmillan.blogspot.com/) provided the colour commentary for the show similar to the two grumpy old men in the Muppet Show and Bryn Oh (http://brynoh.blogspot.com/2011/05/avatar-games.html) was host or something like that while ColeMarie Soleil (http://justexploringart.blogspot.com/2011/05/lea-avatar-games.html or http://colemariesoleil.wordpress.com/) tended to us targets, I mean contestants.

Yesterday, 6-13-11 was the 2nd week for the Linden Lab Endowment for the Arts Avatar Games in Second Life. I was asked to participate last week for the opening of the games, but I had a RL conflict but I knew when I first read about this that I wanted to participate so last night I had my chance. Yesterday I hurried home from work to tp into the contestant holding area which was like a elevator placed on a cloud in the sky where we, the runners for the day, stood or sat around chatting while one by one we were tp'd down individually to take our turn. Elevator music played as we tried to cam down below to watch our fellow runners, only having to resort to using the mini-map to get an idea of how they were doing since we were too high to see the course. A fellow runner advised me to just jump over the water area they refer to as the swamp or cesspool or something of that nature rather than trying to run across the tiny bone bridge-like area that I THINK was designed for crossing. I participated as a fairy but wondered if I would regret that as the audience and I guess Bryn Oh, Crap Mariner and Honour shot their guns as us to slow us down. Fairy wings are large and not so aerodynamic if they can't be used for flying which I was told would be cheating to try to fly. It was suggested but not mandatory to have an interesting looking av, and you know that SL art group.. an interesting looking lot to say the least. Some of my fellow runners included a pine tree looking avatar as she said she felt that would be the best camouflage, one was a pig--a fast pig, and I heard they had some very cool looking contestants the week prior. Colemarie kept us good company and tp'd us down in turns.

I patiently waited my turn seeing my fellow runners return pretty quickly complaining of being hit in the face with giant balls, etc and I really had no idea what to expect since I couldn't' attend the first week. We were supposed to get to watch after our turn was done but the audience/shooting gallery sim side was full so we didn't have that opportunity. Apparently this is as much fun to watch and shoot at the runners as it is to try to run the course. Finally it was my turn. I was tp'd to the starting area standing under the big light when suddenly the start light went from red to green and I tried to run. Now, I don't know if it was lag, nerves, my non-aerodynamic wings or what that slowed me down, or maybe just trying to see what was ahead of me, but I felt like I was walking through mud. Suddenly I was thrown high up into the sky only to land, take a few steps and be tossed into the air again. I still don't know if that was because I was shot or if there was something I stepped on that did that. When I landed I took off trying to run.. and got to the edge of the land before the river/waterway. I jumped as my fellow runner suggest and landed just short of the other side and sunk right to the bottom of the water. So I jumped again and sailed up into the sky only to end up almost eye to eye with Bryn Oh who was manning some sort of platform a little above the course.. I don't know if Bryn was shooting too but I didn't hang around to find out. I forced myself down as quickly as possible and continued on the course that weaved up and around zig zagging a course up a hill. Along the way I was caged.. twice, tried to avoid larger than human size giant marbles rolling down the hill at me, and then there was the wall. The wall blocked the entire path and later I was told those moving blocks underneath me that seemed to just be an annoyance at the time somehow was to make a ladder to so one could walk OVER the wall... whatever, I just walked walked right up the wall a couple times in the corner enough to get a little better momentum by walking up the side mountain wall then made my way over that darn wall. I don't know how much jumping is allowed but in retrospect a giant jump like I did to get out of the water would have worked great here I think. Anyway.. I did eventually make it to the finish, took my place in the spotlight, made a large bow toward the audience and was tp'd back to the elevator.

In the end we tp'd down to check the stat walls and I found my time was 5th best out of the 7 runners for the day. It was also good enough to keep me on the other chart for season's best scores, but since I'm at the bottom of that I'm sure I'll be off that by next week. I know if I knew what to expect I could have done it faster and I'm waiting to see if I can take another turn later in the season if they have space to improve my time. Last week had some much slower times even up to almost 6 minutes, so I really think the times will improve as spectators become participants and being to know what to expect. But having said that I think one of the runners from this week, Zev Titanium, will be very hard to beat. I don't know HOW he made it through so fast. At any rate I picked up a free blaster gun and tried it out. I'll be ready to watch and shoot from the stands now. If you want to sign up to play go to the LL Endowment for the Arts site and fill in an application. There is a lot more information there, on Bryn oh's blog and also on Honour's blog. There is even a very funny trailer about a contestants strategy.. check it out. http://wiki.secondlife.com/wiki/Linden_Lab_Official:LEA_Avatar_Art_Games or sign up here AvatarGamesSignUpHere. 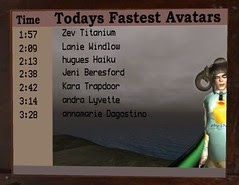 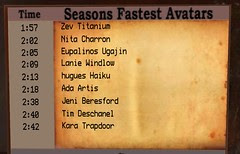 If you want to scope out the course, attend each Monday night at 4pm SLT to shoot and watch or just see this unusual build (although you cant get right on the course but can sit in stands and cam, and the stands themselves are really something to behold) check it out here: http://slurl.com/secondlife/LEA3/237/125/30 or direct link here: LEAAvatarGamesHere.
Posted by Kara Trapdoor at 11:07 AM