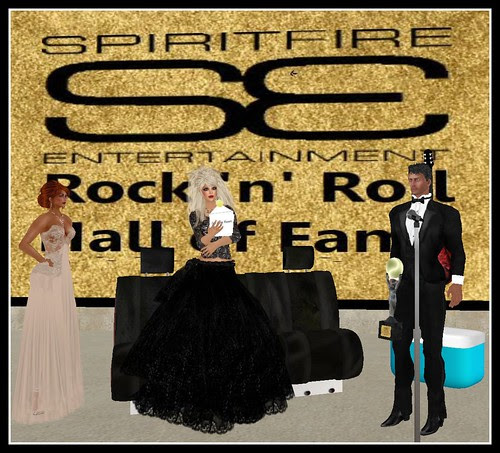 Last night, 6-15-11, celebrated AE's induction into the SpiritFire Entertainment Rock 'n' Roll Hall of Fame. His group has over 1000 members and there was a 2 hour party to celebrate. Friends made a video commemoration that was shown, followed by the award and some good music and dancing. Sher Salmson, his manager who runs Spiritfire Entertainment, said a few words and presented AE with an award statue, as seen in the photo above with Spiritfire partner Nyna Slate. Attendees were offered a cute teddy bear that plays one of AE's original tunes. The venue, Dragon Moon, owned by Nyna Slate, held a large crowd and was decorated in true Hollywood style with a red carpet entry adorned with paparattzi. The stage was flanked by two huge replicas of the award statue and the stage itself had a car seat with cooler next to it that was also seen numerous times throughout the commemoration video. AE is a great guy with a great voice, check out his shows some time. The commemoration video filmed by Doris Fereszk, can be seen here: http://www.youtube.com/user/SuperDoris65?feature=mhee or direct link here: AEVidHere. 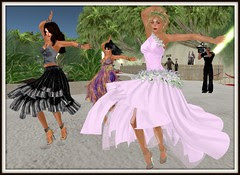