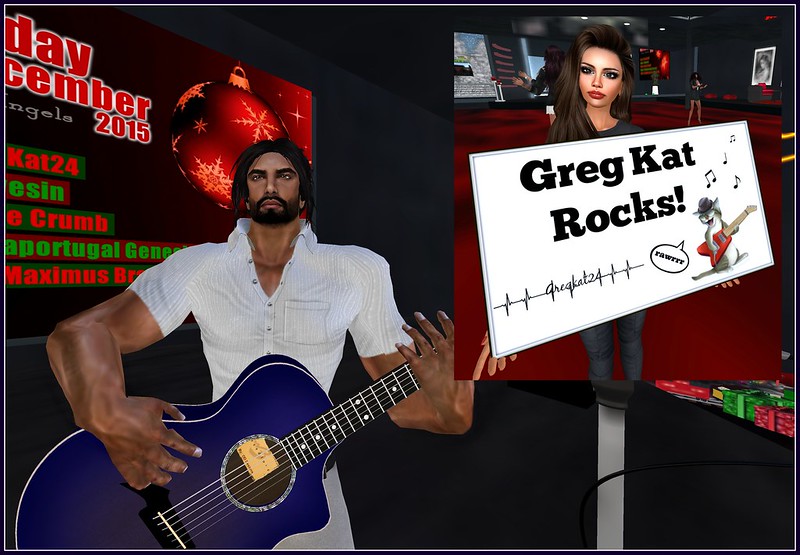 Today I was over at Helle's Angels venue to hear GregKat24 and brought out a sign I made for his shows.  Greg has a HUGE list of songs he sings and plays guitar to.  It's very impressive he can play so many and sing them vs using tracks.  He has a good variety of song genre on his song list and is heavy on classic rock and some 80s stuff I love, some oldies and other things.  I made the sign because, well, basically he's a great rocker, but also I love to request "Rock Me Gently" and he also sings "Rock Me Like a Wagon Wheel" pretty regularly too.  He also does my all time favorite last dance song, "Lights" by Journey and a lot of others I really like such as Blink182, Ozzy, Ramones, Guns N Roses, The Romantics, Creed, Sheryl Crow, etc.

Greg has been into music RL for years and has been in SL for a while but just recently started singing inworld.  He is managed by Whispering Sands Live Promotions and you can find his profile, soundcloud music to listen to, calendar, profile, history and for booking got WSLP website here: http://wslpromo.net/2015/10/greg-kat/

The Whispering Sands Live Promotions bio on him states: "In the world of solo acoustic performers GregKat24 is somewhat of a musical chameleon. Performing well over 1000 RL shows at many diverse venues ranging from college nooners, orientations, and night shows to major resorts as well as headlining club shows and opening for National acts in his native Pittsburgh, PA, he is as comfortable in front of thirty people as he is in front of three hundred or three thousand!

Greg’s solo acoustic show combines intoxicating party rock from the “big 80’s” Hot modern rock from the 90’s and today and enough classic tracks to keep everyone happy. With charm & musicianship Greg uses every trick (fair & unfair) to get the crowd joining in, singing along, and (God forbid) having fun! He is totally audience fueled, leaving plenty of room for requests and guaranteeing that on two show are ever alike!

“Greg Iskat has one of those earnest voices that immediately reminds you of the Eagles’ Don Henly”
Tony Norman, Pittsburgh Post Gazette""
Posted by Kara Trapdoor at 7:37 PM