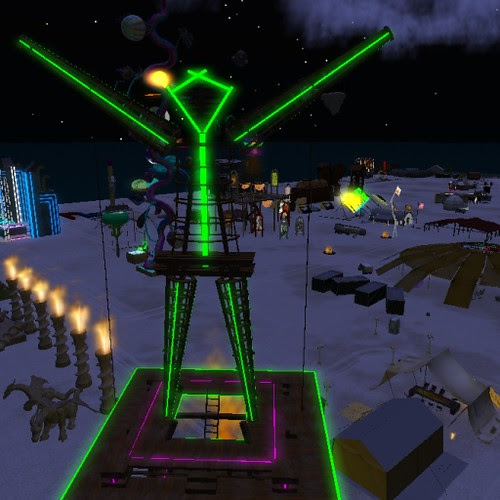 Saturday, October 16, 2010 opens the annual SL/virtual Burning Life event.
*"This year's theme is "Metropolis - Civilization in the Desert." Exploration and expression of the urban reality in the style of Burning Man, where materials are trucked into the desert to build a temporary city that then disappears, leaving no trace."

*"BURN2 is an extension of the Burning Man festival and community into the world of Second life and an officially sanctioned Burning Man regional event, and the only virtual world event out of more than 100 real world Regional groups.

The BURN2 Team operates events year around, culminating in an annual major festival of community, art and fire in the fall - a virtual echo of Burning Man itself."

SL virtual Burning Life began in 2003 with SL residents taking more involvement in 2007. This year is the first year the event is completely sponsored and run by the SL community. Ownership of Burning Life was transformed from a partnership between Burning Man and Linden Lab into an entirely regional Burning Man event in the metaverse and the name has evolved with the changes this year to BURN2. The BURN2 parties run through October 24th with the sims closing Oct.30. This is an annual event not to be missed.

I'll try to add some good direct links later to some of the invited artist's exhibits that I especially like. I just didn't have time before work today.
Posted by Kara Trapdoor at 10:33 AM